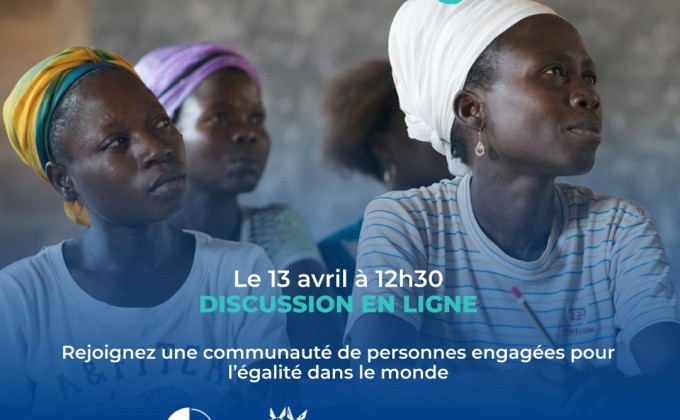 As official programming partner of the Vues d’Afrique International Film Festival, we have created a new category as part of the festival’s official programming entitled “Taking Action for Equality”. The category will feature films portraying initiatives led by women and men who fight day after day for a more egalitarian world, one of the core themes of CECI’s work.

CECI will host an online talk on April 13 at 12:30 pm, inviting the public to venture from the films’ fictional worlds to the reality on the ground through the testimony of several members of the jury who, as actors and actresses of international development, will share their experiences working with issues of gender equality and talk about what motivates them to directly engage in making a difference and bringing positive changes in the world.

Chantal Bernatchez
Ambassador and individual member of CECI.
Former CECI volunteer in Burkina Faso.
Engineer at Hydro-Québec, President and Founder of the Vergers d’Afrique nonprofit organization, and Vice-President and Founder of Iso-Protek, a circular economy company. One of Femmessor’s 100 women entrepreneurs in sustainable development who are changing the world, with more than 20 years of experience working in Burkina Faso for the economic empowerment of women.

“I believe in the power of films to transmit knowledge, understand cultures and open up to the world’s diversity by harnessing the creative potential of filmmakers.”

Fatoumata Touré
CECI Board Member
Senior Advisor in Credit Risk Modelling at the National Bank of Canada. Very engaged as a volunteer in various organizations working in different fields: assistance to immigrants, mentoring in entrepreneurship, reflexion circles on societal, economic and climatic issues. Originally from Mali from a family of seven children, including five daughters.

“I became aware of gender equality issues very early on, as from an early age I was introduced to my condition as a woman in a still very patriarchal society that is Mali. I was lucky to have parents, especially a father, who taught me that the only areas that were not available to me were those that I did not WANT to invest in: I am the keystone of this world’s every possibility!”

Kim Nguyen
CECI Ambassador, engaged in the #CECIForGenderEquality campaign
Director, producer and screenwriter. Received an award for the film “REBELLE” (2012), which dealt with the drama and horror of African child soldiers in the Democratic Republic of Congo.

“Any act of violence against women and girls is a core violation of human rights. In Rwanda, Burundi or the Democratic Republic of Congo, countries profoundly marked by years of armed conflict, CECI mobilizes communities, civil societies and authorities to put an end to sexual violence against women and girls. Protecting the physical and moral integrity of more than 10,000 women victims of violence in Africa, that’s working with #CECIForGenderEquality.”

Connect to the Facebook page of Vues d’Afrique to watch the discussion. We hope to see many of you there!

Participate to the event