CEM is among the first organizations in Quebec to offer real training in international cooperation. It trains members of religious and secular communities called to support Catholic missions throughout the world.

The organization is incorporated under the name Centre d’étude et de coopération internationale (Centre for International Studies and Cooperation–CECI). The Jesuits turn over the Centre to a secular, non-profit corporation of volunteers.

The first group of CECI volunteer cooperants receives training and is assigned to our partner organizations in developing countries.

A project in Guinea is funded by the World Bank, becoming CECI’s first large project funded by an agency other than CIDA.

A fundraising unit is established, followed by the creation of the Alec and Gérard Pelletier Capitalization Fund and the Jean Bouchard Fund.

In Universalia’s evaluation of the organization, it writes, “CECI is one of the best organizations we have evaluated. It values intellectual thinking, shows a spirit of entrepreneurship, and has a synergistic process of creation and learning. Moreover, its management systems are well developed and appropriate.”

Global Citizens for Change, a Canadian coalition of volunteer cooperation organizations, of which CECI is still a member, is established during the International Year of the Volunteer.

CECI purchases the building that is now our headquarters, at 3000 Omer-Lavallée, Montreal, Quebec, Canada.

CECI-Burkina Faso is made a Knight of the Burkinabe Order of Merit, with Agrafe Amitié-Coopération.

As collaboration with social economy organizations Quebec, Canada, and the rest of the world grows, CECI forms a special partnership with the Chantier de l’économie sociale du Québec.

CECI receives the Hommage-Bénévolat Québec 2008 award for the quality of our volunteer cooperation programs.

CECI is increasingly called to action in humanitarian crises. It publishes the CECI Humanitarian Assistance Operations Manuel, demonstrating its expertise on the subject and its innovative approach of incorporating sustainable development into crisis response.

On January 12, 2010, a devastating earthquake strikes Haiti. Thankfully, the CECI offices and personnel were spared. CECI immediately launches an emergency campaign. More than 40,000 donors respond to the call, raising $21 million (in cash and goods), and providing assistance to 750,000 people.

Vietnam becomes a middle-income country and is set to become an industrialized country by 2020. CECI pulls out of the country after dedicating 20 years to reducing poverty through innovative approaches involving participative planning and disaster risk reduction. During that time, poverty in the country dropped from 60 to 14%.

In Haiti, Central America, Nepal, Pakistan and the Sahel, CECI provides humanitarian assistance through its programs to reduce risks related to climate change.

The Armande Bégin Fund is created in memory of the wife of Yves Pétillon, CECI’s Executive Director from 1989 to 1999, to back CECI’s development projects supporting women in Mali.

CECI undertakes an inclusive and participative strategic planning process for 2014 - 2019. The five-year plan aims to transform CECI’s eight country offices outside of Canada into self-sufficient entities. It includes strategies to diversify the organization’s funding, increase its visibility and prominence, and change its governance structure.

The Transition Fund is established and funded by religious communities—loyal partners to CECI since the very beginning—to support the transition toward self-sufficiency.

Establishment of CECI's Club des Ambassadrices , uniting more than thirty influential women in Quebec in support of CECI’s projects that promote women’s entrepreneurship throughout the world.

In fall 2014, CECI airs its first commercial on the history of giving. It reaches more than 1.2 million viewers.

CECI signs a contribution agreement for the third phase (2015-2020) of the Uniterra volunteer cooperation program, which is jointly operated by WUSC and CECI.

The 13 first associate members are welcomed to the CECI corporation.

The first two advisory committees are created, one for CECI-Nepal and one for CECI-Haiti. Their representatives attend CECI’s first International General Meeting in October 2015.

Affirming its desire to intensify its outreach, CECI teams up with partner WUSC to organize the International Forum, which was held for the first time in January 2015 in Montreal, with over 500 participants.

CECI adopts a Sustainable Development Policy that advocates for social equity as a goal, economic development as a means, and protecting the environment as a condition.

Following a flood that severely damaged all of its premises, on July 14, 2015, CECI returned to the building at 3000 Omer-Lavallée Street after a year of major renovations that allowed for modernization and renovation. Substantially expand CECI's facilities as well as its rental space.

A third advisory committee is formed, this time for CECI-Senegal. Its representative takes part in the second General Meeting, held in January 2017 in Montreal.

The advisory committees of Guatemala and Mali are formally established.

CECI once again organizes the International Forum in Montreal.

CECI celebrates its 60th anniversary in the presence of its country teams, numerous partners and former volunteers, paying tribute to all those who have contributed to building its legacy.

CECI Burkina Faso receives the national distinction of Knight of the Order of the Stallion, Burkina Faso’s category of the highest distinctions, in recognition of the organization’s work and its contribution to the development of the country.

The International Forum will once again take place in Montreal in January, under the theme: “2030 and beyond, solutions without borders” allowing nearly 700 participants and speakers to share their best practices in the field of international cooperation.

Transitional year with the end of the Uniterra Volunteer Cooperation Program in partnership with the EUMC, after 16 years of joint implementation; the program has helped improve the living conditions of millions of marginalized people across 14 countries.

Signature of an agreement and launch of a new Volunteer Cooperation Program for CECI in 10 countries over 7 years.

Complete revision of CECI’s general regulations to launch its localization process and establish truly international governance; Beginning of the gradual integration of work as an international network at all operational levels of the organization.

In consultation with all stakeholders and country teams, development of a new ambitious 2020-2025 strategic framework to guide CECI’s actions through innovation, mobilization and transformation. The framework aims to consolidate approaches for the economic empowerment of women, women’s rights, women as key actors in climate action and climate resilience, and the adaptation of communities in fragile contexts.

CECI pays tribute to all those who made our dream of solidarity a reality, and who continue to be actors of change and sustainable development.

Since our founding in 1958, CECI has become a veritable incubator of international cooperation in Quebec and Canada.

CECI has broken new ground in many areas, paving the way for international cooperation in Quebec, integrating human rights concerns into the bilateral programs of the Canadian International Development Agency (CIDA), which is now called Global Affairs Canada (GAC), and instituting such important programs as Women’s Rights and Citizenship in West Africa and volunteer cooperation programs Leave for Change and Uniterra.

Known for their commitment and professionalism, the employees, volunteers and members of CECI serve with a growing number of Canadian and overseas organizations. Our achievements over the years are just a glimpse of what we have to offer in response to the challenges ahead.

In Canada, non-governmental organizations (NGOs) began taking shape and sending volunteer cooperants abroad in the period following World War II, when major international institutions were being formed. It was during this time that CECI, Quebec’s first international cooperation organization, was founded.

The Centre d’étude et de coopération internationale (Centre for International Studies and Cooperation—CECI) was founded in 1958 under the name Centre d’études Missionnaires (CEM) by Father Jean Bouchard, a Jesuit priest. CEM aimed to inform the missionaries of religious orders and secular entities with close ties to the Church on the cultural realities and socioeconomic conditions they could expect in poor countries.

It provided training through an anthropological and socio-political lens, drawing attention to North-South inequalities and raising awareness about the needs relating to health, education and economic development of populations in the countries where CEM worked. The training provided volunteers leaving on mission with documentation and discussions on listening skills, open-mindedness toward other cultures, and maintaining a sense of respect.

In 1968, CECI became secular and management was turned over to a corporation of engaged citizens from various sectors of society. The Society of Jesus remained on the management team until 1979 and, to this day, is still represented on the Board of Directors.

In 1968, CECI obtained funding from the Canadian International Development Agency (CIDA) for its training and international volunteering activities. Volunteers were assigned primarily within the network of Canadian Catholic missions that had been working closely with CECI since it was founded. 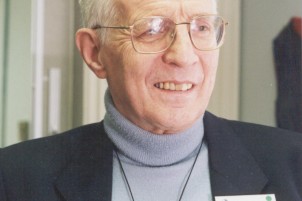 “There are so many ways to work for a world of dialogue, sharing, brotherhood, and mutual aid.” – Jean Bouchard, SJ, May 1993

Born in Sainte-Anne-de-la-Pocatière on 26 December 1919, Jean Bouchard obtained a classical education at Collège de La Pocatière. He founded Jeunesse Étudiante Catholique at La Pocatière in 1934 which later became a Scouts group in 1938. In 1940 he joined the Jesuits. After earning a Bachelor’s degree in philosophy in 1946, he was ordained as a priest in 1952.

In 1958, Jean Bouchard founded the Centre d’Études Missionnaires (CEM), which in 1967 changed its name to Centre d’Étude et de Cooperation International (CECI). He remained the director of CECI until 1974, making many trips around the world and lecturing throughout Québec. In 1974 he was appointed to the General Secretariat of the Society of Jesus. Returning to Canada in 1989, Father Bouchard became a priest and later superior at the Maison des Jésuites in Saint-Jérôme. He died in Saint-Jérôme on 27 February 1999.

Jean Bouchard left a great many articles published in journals such as Prière et Action, Collège et Famille, Prêtres et Missions, Le Brigand, Nouvelle revue de sciences missionnaires, and Relations. He is also the author of a report on lay missionaries for the Missions Office in Ottawa. 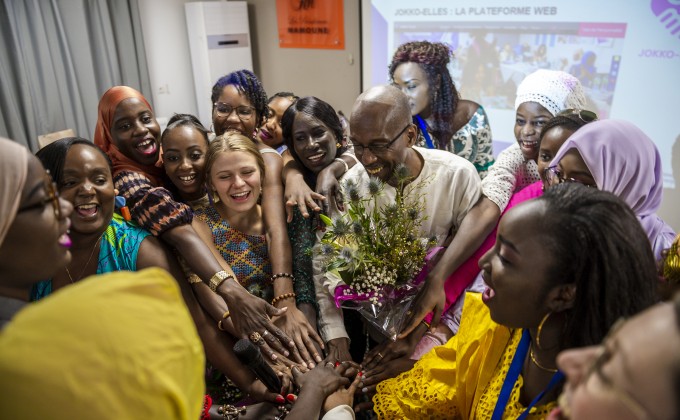 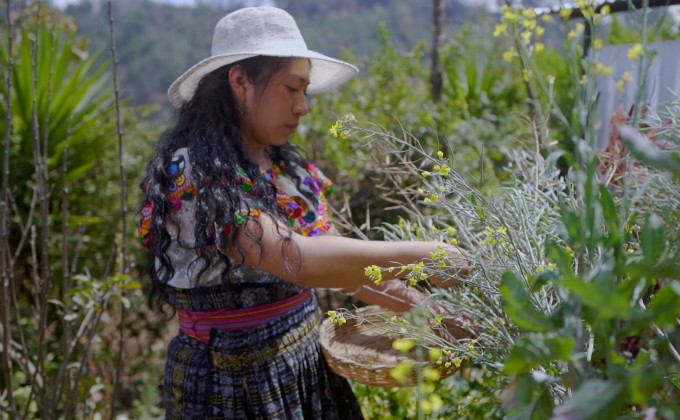