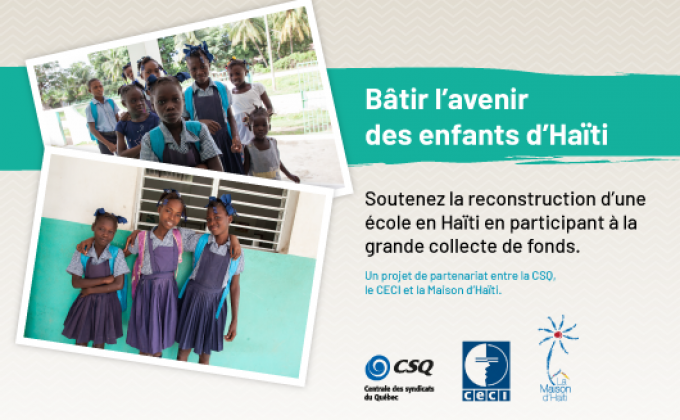 Montreal, December 7, 2021 - The CSQ, Maison d'Haïti and CECI have announced a new partnership to finance a pilot project to rebuild a school in Haiti's Grand Sud. Several unions affiliated with the CSQ are joining the Haitian diaspora in this first-ever fundraising effort to rebuild a public school that can accommodate more than 400 students. The pilot project requires an investment of more than $600,000 Canadian for a paracyclic and earthquake-resistant building.

An earthquake caused extensive human and material damage on August 14 in the Grand Sud of Haiti, worsening an already difficult socio-economic situation for the people living in this region. In the three departments of the South, Nippes and Grand'Anse, 906 schools have been completely destroyed or seriously damaged according to UNICEF, as of September 8, 2021. More than 400,000 students and teachers in these departments are affected.

After having donated $10,000 last October for the purchase of school supplies distributed by CECI, the Centrale de la CSQ is making a longer-term commitment to the education of Haitian children.

"Education is a right, but for it to be effective, it is essential to rebuild the schools destroyed by the earthquake. In order for the children of Haiti's Grand Sud to be able to return to school as quickly as possible, the members of the CSQ, in collaboration with the National Confederation of Educators of Haiti, have decided to commit to this major project," said Luc Beauregard, secretary-treasurer of the CSQ.

For its part, the Maison d'Haïti mobilized the students of Champlain College in Saint Lambert, who raised over $1,000. "Education is at the heart of all the actions of Maison d'Haïti, which throughout its 50 years of existence has focused on the ability of citizens to become autonomous. Education is the path to development, justice, equality, respect for rights, inclusion and citizen participation," said Marjorie Villefranche, Executive Director of Maison d'Haïti.

CECI is proud to collaborate with organizations with strong roots in Quebec, such as the CSQ and Maison d'Haïti, which are committed to the education of young Haitians," said Philippe Dongier, CECI's Executive Director. We have been present in Haiti since 1971, and given the scope of the needs, we hope to have a greater impact by working with partners from various sectors of Quebec society.

As part of this partnership, the CSQ and its affiliated unions are setting up a fundraising campaign. La Maison d'Haïti is mobilizing members of a part of the Haitian diaspora for the fundraiser while ensuring their long-term involvement. With more than 50 years of expertise in the field, CECI will consult with and accompany communities in the selection of a site in an area where it is present and will supervise the work as well as quality control.

About the CSQ
The CSQ represents close to 200,000 members, of which approximately 125,000 are education workers. The CSQ has 11 federations with some 240 affiliated unions, as well as AREQ (CSQ), the Association des retraités et retraités de l'éducation et des autres services publics du Québec. The CSQ is also present in the health and social services, early childhood education, municipal, recreation, culture, community and communications sectors.

About Maison d'Haïti
Maison d'Haïti is a community and cultural organization founded in 1972 that welcomes more than 10,000 immigrants each year. It operates through six components: Education, Family, Women, Integration, Youth, and the Arts Center. La Maison d'Haïti develops activities for its participants in the areas of education, reception, integration, youth and family support, women's advocacy, and economic, social and cultural integration.

About CECI
CECI is a development and international cooperation NGO founded in 1958 whose mission is to fight poverty and exclusion of the most marginalized populations in Africa, Asia and the Americas. CECI is involved in various projects in humanitarian assistance, development and volunteer cooperation. Following the first emergency, we implement socio-economic rehabilitation and reconstruction projects, and we maintain our development activities at all times in order to promote a rapid resumption of all community activities.