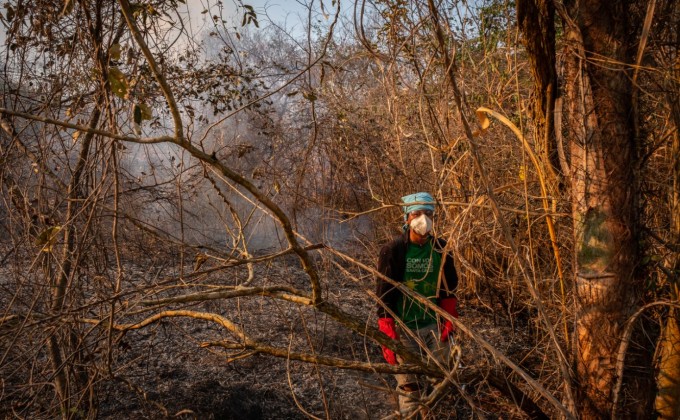 The situation in Bolivia’s Amazon forest remains a humanitarian and environmental emergency with a region 25 times the size of the Greater Montreal still on fire. Fragile ecosystems are being destroyed, displacing families who have lost everything. To date, almost 5000 indigenous families (25,000 poor indigenous farmers, 60% of which are children), have been directly affected by the disaster. They are lacking access to water, food, suffering from respiratory problems and have lost their homes and livelihoods.

Two weeks after the devastating fires began wreaking havoc, the CECI Bolivia team, in collaboration with local organizations, began evaluating a relief response. At the end of August, CECI launched an emergency appeal and thanks to the generosity of our donors we quickly raised over $50,000!

Thanks to these donations, CECI is now supporting displaced families in the Chiquitania and El Porvenir Regions (particularly those with young children or pregnant women) with clean drinking water, baby formula, hygiene and dignity kits for women, blankets, protective masks and eye cleaner. CECI is also supporting actions to prevent the spreading of the wildfires into the Madidi National Park, which is considered the most biodiverse national reserve in the world.

In the Cerro Verde indigenous territory, the project will directly benefit 318 families (approximately 2,000 people) including 954 youth under 18 years of age and 715 women.

Further, CECI is supporting firefighters with much needed equipment to combat the flames including: water bins for 200 liters, buckets, backpacks to spray water, fire resistant boots, water pumps, shovels, first aid kids, lanterns, transportation to and from the wildfire areas and the leasing of a 1,000 liter water truck that can easily access fire sites.

Thank you to all the donors who generously contributed to CECI’s efforts and who make our intervention possible!

Present in Bolivia since 1990, CECI intends to continue playing its part in helping the most vulnerable communities. We still need your help!

Donate now to our emergency fund for Bolivia.

In recent decades, CECI has frequently been called upon to carry out humanitarian aid operations in Asia, Africa and the Americas, to help people facing natural disasters or human conflicts. Our approach is to respond to the needs of affected populations through local partners, in collaboration with the country’s authorities.

A final report on CECI’s activities in Bolivia’s Amazon will be released at the end of the project.