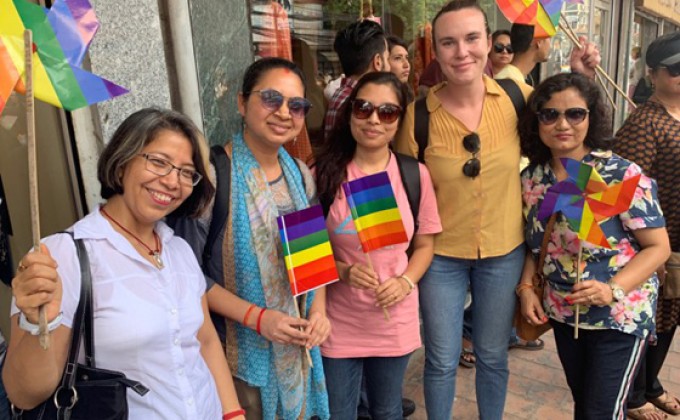 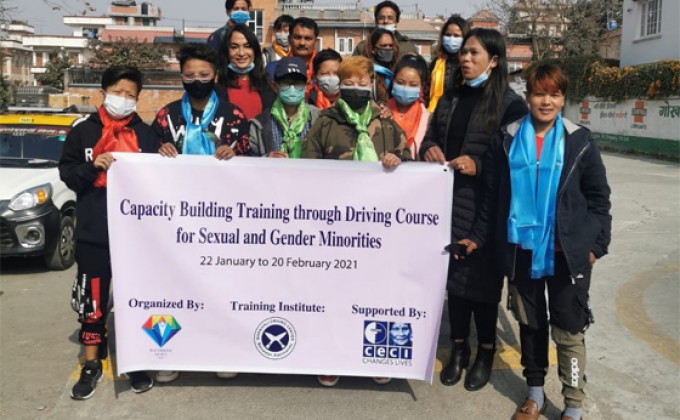 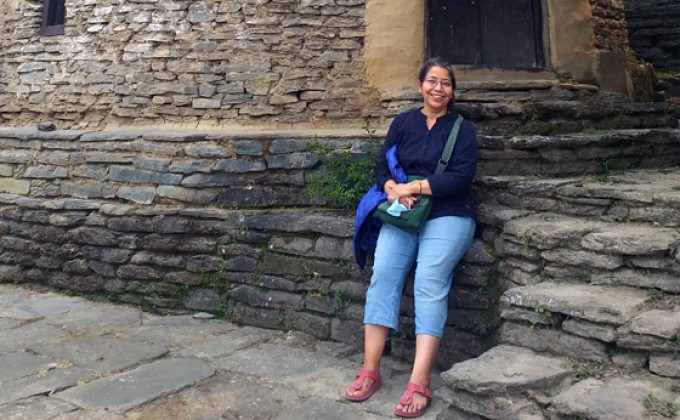 Sagun Bista, 50, lives in Kathmandu, Nepal’s capital. It will soon be 25 years since this botanist by training carried out her first mission for CECI. Today, she is the country coordinator of the Volunteer Cooperation Program (VCP), managing both the collaboration with local partners and the Canadian volunteers who, year after year, come to provide their support and expertise.
Sagun Bista talks about the VCP’s most recent projects, including one with the LGBTIQ community, and offers a glimpse into the Nepalese reality.

How did studying botany lead you to fight for gender equality and social inclusion?

In 1998, as part of my master’s thesis, I was conducting research in one of Nepal’s national parks. I was recording and identifying flowers and plants and studying their growth in different environments. At the same time, CECI wanted to conduct studies in the high mountains of Nepal to see if certain medicinal herbs could grow at lower altitudes with the same chemical components, and thus be cultivated by other communities. It was a perfect fit for what I was doing! So, I was hired as a research officer for 6 months, and then, after taking a few months off to finish my thesis, I went on a series of contracts with CECI until 2003.
Most of my work was in the field. To be honest, I didn’t feel any different from the men I was working with in the forestry sector, and when I heard my colleagues in the office talking about gender issues, equality, feminism, I didn’t really understand the significance of it, because it wasn’t something that directly concerned me! I only gradually became interested in these issues.

Until then, you had never been confronted with any kind of discrimination?

No! My mother always gave me the same speech as she did to my six brothers and sisters, encouraging me in whatever I did, and telling me that I had to be good at whatever I did. I was responsible for my own success. And because we happen to be from one of the higher castes, kshetris, the warrior caste, I was never discriminated against because of my caste or because I was a woman.
It was during my first contract with CECI that I was confronted with discriminatory behaviours. I remember this first mission, which we organized with a Canadian volunteer in a very remote region, high in the mountains, four days away from the closest village. I still remember the porter who was sitting in the wet grass, in the cold, during a meal break. I offered him to come and sit next to me and share my mattress. He refused, and I had a hard time convincing him. When he finally agreed, the local healer who was with us became very angry: how could I let a Dalit approach me like that? I remember my disbelief and my own anger. The shock I felt. From then on, I began to open my eyes to this other reality.
In fact, until then, Nepal for me was only Kathmandu. I knew nothing of the diversity of my country. It was during my field missions that I discovered that more than a hundred languages are spoken here, and how different the communities and cultures of this small country are, depending on whether you are in the East or the West, in the plains or the mountains.

How did you become interested in gender equality and women’s issues?

As I mentioned, I began to learn about these topics through exchanges with my colleagues at CECI, and gradually I became interested in learning more. In 2003, I got a scholarship from the Norwegian government to do my second master’s degree at the Asian Institute of Technology in Bangkok, and that’s when I started to study gender issues. Then I worked for an American NGO in Pakistan, India, Sri Lanka and Bangladesh with women’s groups, before returning to Nepal and coming back to CECI.
By then I had become a very independent person, having spent a lot of time travelling and having fully embraced the responsibility of being on my own. I had realized that, given the opportunity, women can do anything, they can stand on their own two feet. And I started thinking that we had to walk the talk. Not just preach something, but set an example, show that we can do it. And do it. That’s when I made the decision not to depend on anyone. Hence, I remained single and refused to live in the family of one of my brothers.
In a patriarchal society like the Nepalese one, where women are supposed to be protected by a male relative, a father, a brother, a husband, an uncle, a cousin, a son..., the path I chose was not easy, even in a big city. Today, I am single and without children, which is quite an unusual situation in Nepal, and one that is not always well seen. But this personal situation allows me to be more active and more involved in my professional life.

Let’s talk about your work then. CECI’s new Volunteer Cooperation Program (VCP) was launched in April 2020, just weeks after the pandemic began. How did you adjust to this unprecedented situation?

Unfortunately, this was not the first time we had to deal with such a chaotic situation: the 2015 earthquake took place four days after the previous VCP, Uniterra 3, had been signed! This time, when the current VCP was launched in April 2020, the lockdown had already begun, the borders were closed, international flights were cancelled, and the few remaining Canadians who were still in the country and could have become potential volunteers had warned us that they would return to Canada with the first available charter flight! Under these conditions, with travel restrictions and so much uncertainty, we decided to work with volunteers remotely, in a virtual mode. In this way, we set up seven assignments with Canadians during the past year. This is a far cry from the numbers of previous years, when we had up to 32 volunteers on site at a time, but we were able to continue our work in support of our partner organizations, which was very important to us: to maintain our relationships and show them that despite the pandemic, we were not abandoning them.

Concretely, how did you maintain the relationship with your 14 local partners?

The idea was to offer them technical and financial support so that the women they care for could diversify their sources of income, sometimes by starting a micro-enterprise, thus mitigating the impact of Covid-19 by developing a new livelihood. We asked each of our partners to submit projects which we financed through our thematic funds (1). Of course, these projects had to be in line with the goals of the VCP: economic empowerment of women and marginalized groups, diversity and inclusion, and capacity building for resilience to climate change. In total, twenty-eight initiatives led by the 14 partners were funded during this year, most of them in response to the Covid-19 pandemic, and as many training sessions were given to several hundred people – on compost management, soap making, textile weaving, packaging of agricultural products, etc. – all with the objective of generating income. But I think what's most interesting is that, through the VCP, we were looking to work with new partners and new target groups.

For example, with the LGBTIQ community, which is increasingly visible in urban centres. If they are not the target of open violence, they are clearly discriminated against, and many members of this community, unable to access education or professional opportunities, become sex workers. With our partner Blue Diamond Society, we have therefore set up three types of training in response to requests from members of this community: a workshop to learn how to drive, some wanting to become drivers; another to learn how to make pickled vegetables, a staple side dish for all Nepalese meals; and a make-up and facial workshop carried out by transgender people who work as beauticians. In addition to these trainings, which involved nearly a hundred young people from the LGBTIQ community, we supported our partner in its efforts to make the government authorities aware of the challenges and difficulties that the community faces in the country, and to make it better known. Thanks to this work, the community will be able to be counted in the census that starts in June. This is a great victory.

What brought you to diversify the group of target beneficiaries?

In preparation for the implementation of the new VCP, about two years ago we conducted several consultations with over 200 people from various partners and groups in urban and rural areas of the country. Through this process, many of the field workers mentioned the specific difficulties faced by some women and pointed out, for example, that the challenges faced by transgender women were clearly not the same as those faced by Nepalese women living in the high mountain communities of the north of the country, where matriarchy still exists! This made us realize that we had to stop looking at women as a whole, as a single entity. We were already doing this for Dalit women, considering the triple discrimination and burden that affected them – poverty, caste and gender. But it is true that we had not yet developed this intersectionality approach for all our targets. Now we assume that each group of women has its own challenges to overcome, and we plan our initiatives accordingly.

Hence, for example, this project with the Meche community, formerly nomadic, now threatened with extinction, which is in the process of sedentarization and with whom you have developed in recent months a subsistence farming project...

Yes, or this project with our partner Setu, which supports women living in slums and those infected with HIV-AIDS. The pandemic has made their already precarious situation even more difficult. By being confined, they had lost all sources of income, and waste was accumulating in their tiny living quarters. So, our partner asked us to organize a vermicomposting training. We provided each woman with a kilo of earthworms. After 36 days, they had produced and sold a good quality fertilizer, in addition to selling some of these worms, which reproduce exponentially, to another group of women. The success was such that the first group of women indicated that they would like to scale up the vermicomposting initiative in order to keep developing this income-generating activity. Some 50 women have thus been able to find a new source of income.
Another example is Muslim women, who are among the poorest in our society. Their families do not allow them to go out and work outside. So, we made sure to offer them training so that they could make tika, the red dot that Hindu women wear on their forehead, from their home.
So now, when we talk about women, we try to be as inclusive as possible, to consider all women, those who come from all walks of life. We try to meet their specific needs as best we can and to help them get through this pandemic, which has increased the fragility of their situation and made their future even more uncertain.

* CECI’s volunteer cooperation program aims to improve the economic and social well-being of the poorest and most marginalized people in Africa, Asia and the Americas. CECI is specifically looking to strengthen the position of women and young women as leaders and agents of change for a sustainable and inclusive development. CECI is currently being implemented in eight countries, with the financial support from the Government of Canada, through Global Affairs Canada.

Find out about the volunteer opportunities that are currently available.