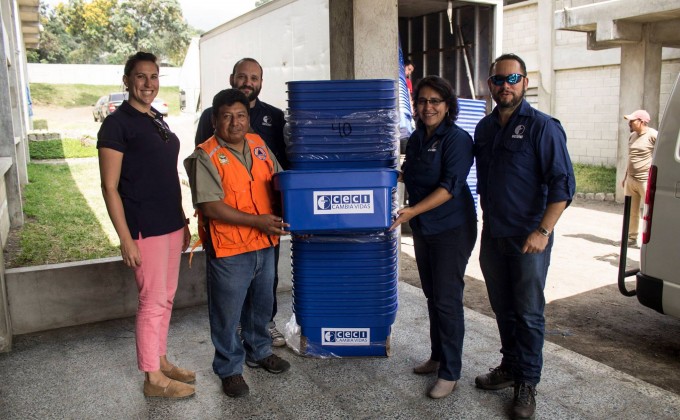 Since the tragedy of June 3rd 2018, which ravaged the lives of thousands of families living near the Fuego Volcano in Guatemala and which affected over 1.7 million people, CECI and other key actors have joined forces to respond as quickly and effectively as possible to the crisis.

CECI remained in operation in the Sacatepéquez Department in Guatemala until the end of December 2018. Through our operations we were able to ensure the safety and decent living conditions of more than 200 families. Providing basic necessities as well as training enabled women to resume economic activities.

During the first phase of its intervention, between June and August 2018, CECI prioritized humanitarian action in the San Juan Alotenango municipality: identifying needs in the official temporary shelters for evacuees -- single-family transitional shelters -- and delivering basic necessities to ensure decent living conditions for the refugees.

With your donations, the CECI-Guatemala team was able to offer basic furnishings for the shelters and ensure conditions of health and safety. In total CECI will have provided these families with 1000 blankets, 759 storage bins, 777 chairs and stools, 214 tables, 116 packages of sanitary napkins, 200 spill kits, 91 bins (of which 40 for recycling), and 576 garbage bags.

In addition, protective gear and first aid kits were provided to municipal firefighters, and 50 fire extinguishers were installed in the shelters for fire prevention.

See:  Summary of the first phase of the intervention in Guatemala (in French) - Factsheet in french)

During the second phase of the intervention, CECI created a series of training workshops to develop the skills and knowledge of those housed in the transitional shelters.

An economic capacity-building workshop designed for craftswomen refugees was offered, and 50 participants were provided with materials and supplies to create their artisanal products.

Also provided were workshops on environmental education, to encourage the active participation of the families in the shelters in the waste management of the facility.

Thanks to your donations, CECI-Guatemala has been able to provide supplies that respond to identified needs.

See Summary of Phase Two of the intervention in Guatemala (in French) - Factsheet in French.

Thanks to our donors!

Altogether the actions of CECI in Guatemala have directly benefited over 800 people -- primarily young women -- improving their well-being and ensuring decent living conditions in the single-family transitional shelters, while reviving the economic activity of women at the same time.

We extend our heartfelt thanks to all our donors who have generously contributed to these efforts and have enabled CECI to aid the families who were victims of the Fuego Volcano eruption.

To find out more about CECI’s work in Guatemala: see our humanitarian intervention page (in French).