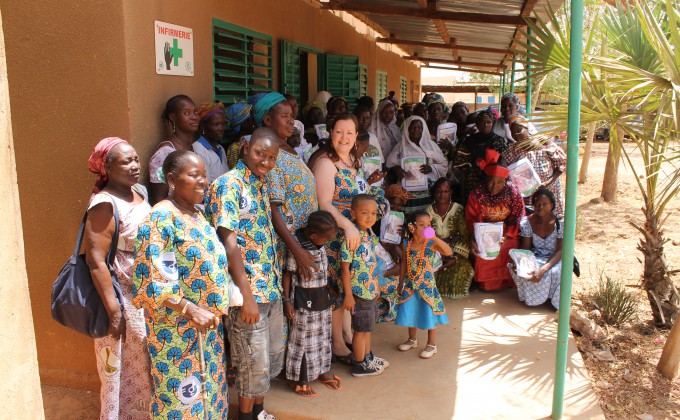 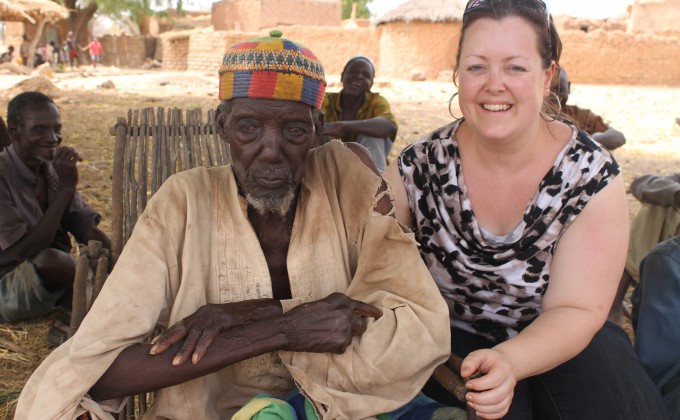 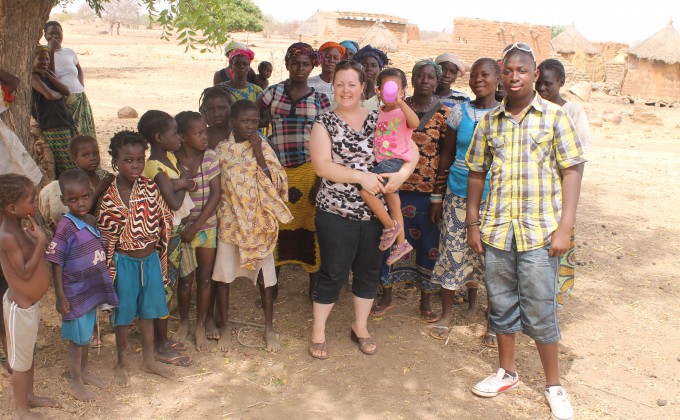 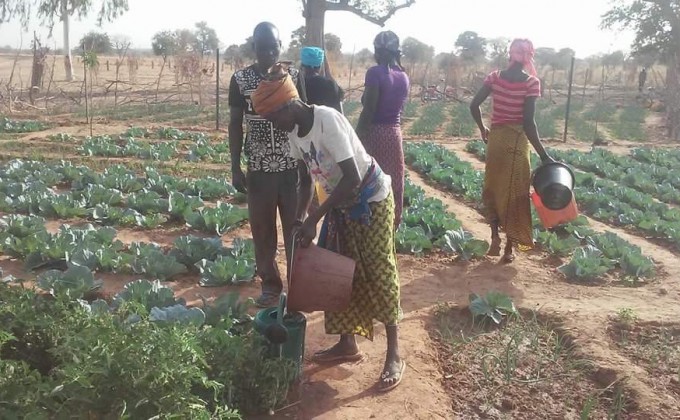 The greatest regret of her life? "Not having known about international cooperation sooner!" Chantal Bernatchez was 26 when she first volunteered with CECI. Her first assignment was in Burkina Faso, a country she had discovered four years earlier during an internship through her university—an experience that turned this Gaspé native’s life upside down. Since then, she has continued working to raise awareness among women in Africa and youth in Quebec about the importance of getting involved. At the 2017 International Forum held in Montreal in January, CECI awarded Chantal the Rosario Demers Award, recognizing her exceptional commitment as a volunteer.

“That’s Marguerite on the left. Next to her are Honorine and Clarisse. And this is Awa…”  Voice and eyes full of affection, Chantal Bernatchez points to the Burkinabè women in the brochure and tells us each of their names. Ten years ago, Chantal left her native Quebec to complete a two-year cooperation assignment with CECI near Ouagadougou, in two Songtaab-Yalgré Association (ASY) cooperative facilities.

Smiling in front of a table covered with a flowery waxed tablecloth, the workers present their new products: jams made from shea pulp. "Do you see those smiles?" asks the 38-year-old industrial engineer, expressing admiration and respect for these eager and courageous women. “That is what I am the most proud of—seeing them smile about their success. And knowing that I helped make that happen.”

Nothing in particular made the young woman from the coastal village of Grand-Valée, in Gaspé, predisposed to devoting large part of her life to African women. Of course, with parents heavily involved in volunteer work and the community, she was taught at an early age of the value ​​of getting involved and showing initiative. But at 22, when she arrived in Montreal to receive a bachelor's degree in industrial engineering from Polytechnique, Chantal had never left the Belle Province and had little desire for adventure or international travel.

It was pure chance that sent Chantal on the path to Africa. Nearing the end of her studies, she was looking for an internship, with one major criterion—it had to be a long as possible. The only internship available at the time was in Burkina Faso. She decided to face her fear of the unknown and took an assignment with Flash Beauté, a Montreal-based company that owns the Kariderm product line and imports shea butter produced by women in the ASY cooperative. So Chantal came to CECI to research shea—a tree about which she knew absolutely nothing—and pored over the Routard’s guide on Sub-Saharan Africa.

One month later, full of prejudice and fear, Chantal arrived in Ouagadougou. The culture shock was intense.  “I was in complete shock,” she recalls with a smile. “It is totally destabilizing, but it’s a necessary step to prepare you for what comes next.”

Chantal was assigned to help the cooperative make some necessary changes to shea butter production for it to receive organic certification. At the same time, she was using the $1,000 in funding she had collected back in Grand-Valée to help rebuild the production site.  “Little by little, we start to build trust and open our hearts to one another. And, of course, after three months I didn’t want to leave anymore!” Chantal says she felt a sense of accomplishment and pride as these projects took shape. Having realized that it was possible to “make miracles happen without much money,” she vowed to return.

THE “GREEN GOLD” OF BURKINABÈ WOMEN

Four years later, in May 2005, Chantal was pursuing a master’s degree at the Université du Québec à Trois-Rivières. Having been awarded a grant, she returned to Burkina Faso to conduct applied research on the quality of shea butter. She was happily reunited with the women collectors and producers in the cooperative, and learned that CECI, an ASY partner, was looking for a volunteer for its Uniterra program (1) to promote shea butter.

Chantal jumped at the chance. A few months later, newly wed to Rasmané Ouedraogo, a tailor she had met a few days after her arrival, she signed on for her first international cooperation assignment. The next two years gave her “the feeling that anything is possible.”

As part of her volunteer assignment, the industrial engineering student worked with women in the cooperative to find new uses for shea fruit. From this initiative came the idea to use shea pulp to make jam. “We focused on two recipes, one sugar free and one with honey,” she explained.  “We were producing sixty jars a day. It was all exciting, but still very artisanal.” Convinced of the commercial potential of these organic products and the need to step up operations to the semi-industrial level, Chantal put together a report that she defended for several months, with encouragement and support from the women in the cooperative.

In November 2016, just a few weeks after her assignment had ended, Chantal received the good news. The World Bank had decided to support the Karidélice project, awarding it the best women-led innovation prize. ASY received a US$30,000 grant, and the production facilities were up and running the following year.

AWAKENING A DESIRE TO GET INVOLVED

Returning to Quebec in January 2007 was as big a shock to Chantal and her husband as it was when the young student first stepped foot in Ouagadougou six years earlier. The young couple and their child had their fair share of challenges in terms of both professional and social integration, especially in the rural area where they lived for a while. But even as they were adjusting to their new life, Africa was never far from Chantal’s mind.

In 2009, the former volunteer met Chantale Arseneau though Flash Beauté. A professor in dietary techniques at De Maisonneuve College, Arseneau was taking her students to work with women of the ASY cooperative to further improve shea butter production and diversify the Karidélice product line. The two women immediately hit it off. With their combined experience and knowledge, they worked together to develop production procedures as well as the actual products, and to identify new markets.

As she collaborated with the Burkinabè women from her office in Montreal, Chantal continued to work with Quebec youth, hoping to awake in them a desire to get involved—a cause that had been near and dear to her heart since her first trip to Africa. “My experience volunteering abroad changed the way I handle challenges in life,” she explained. “It completely changed the course of my life!” Chantal spoke about her experience to students, especially girls studying science, in universities, elementary schools and high schools, sharing her passion for international cooperation and encouraging students to be open to other people and places.

Last year, Chantal joined CECI’s Club des Ambassadrices, which encourages economic development for women around the world and aims to strengthen women’s entrepreneurship. Since 2014, the Club des Ambassadrices has supported some 5,000 women rice parboilers in Burkina Faso to foster their economic empowerment by promoting the value of domestically grown rice and strengthening rice-parboiler organizations to turn them into profitable, professional businesses that are recognized partners in the industry.

“It is important to get people thinking about how they can get involved here in Quebec, but also with the women of Burkina Faso,” she explained. Quoting the American writer Richard Bach, she likes to remind people that “You are never given a wish without also being given the power to make it come true.” According to Chantal, “This is the approach that I want to bring to the Burkinabè women. We can provide them with the technical and financial means to liberate themselves, and we can surround them with a network, but also—and this might be the most important thing—they have to believe in their potential and talent. Because those women are fighters!”

Chantal created the Vergers d'Afrique association Chantal in April 2016 with her husband and her partner Chantale Arsenault, who is also a member of the Club des Ambassadrices. The Association is helping the Burkinabè people become more self-sufficient through a program to plant and promote mango trees to help combat food insecurity and desertification.

In Téma-Bokin, where Chantal’s husband was born, a local farmer’s association was started to begin work on the first of these projects. “So far, 500 trees have been planted—mangoes, guavas and peanuts,” Chantal tells us. “While we wait for them to start producing fruit, we have also set up gardens that have drawn around 40 women and are helping to create food security in the community.” In time, Chantal says the gardens will be harvested and fresh products sold at local markets, or even to food processing facilities. This is a pilot project that the former CECI volunteer would like to expand to other semiarid areas in the province, and perhaps to other countries west of Africa.

(1) The Uniterra program, carried out by  WUSC and CECI since 2004, allows Canadians to make a lasting commitment to increasing the economic power of women and youth around the world. It receives funding from the Government of Canada, provided through Global Affairs Canada.