Economic Empowerment of Women is #CECIForGenderEquality 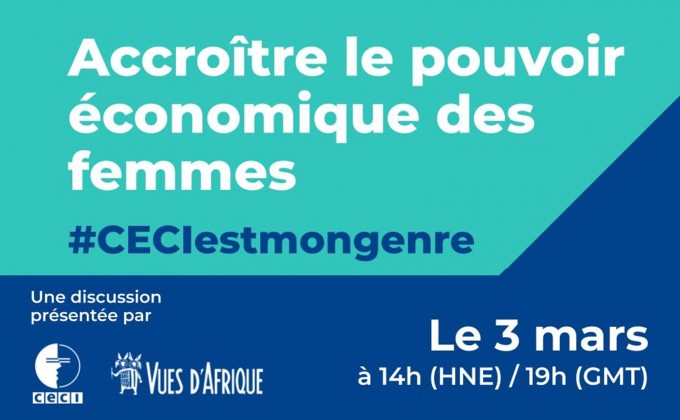 In 2021, CECI and Vues d’Afrique are teaming up to invite you to a series of online discussions covering various issues of gender equality in Africa and the Caribbean. A well-known person from the world of African cinema will speak with international development actors involved with CECI in various countries. Come discover the inspiring stories and testimonials of these people who work every day for a more just, egalitarian world that is free of discrimination!

Poverty is a social issue affecting both women and men, but women, young women and girls are affected the most because of persisting structural and social inequalities. According to UN Women, it is estimated that the crisis linked to the COVID-19 pandemic will force 47 million of them into extreme poverty this year. Together with Beninese filmmaker and activist Kismath Baguiri, Lionel Constant D’Oliveira and Rosy Cyr, two individuals involved in the project Supporting Women Entrepreneurship in the Rice Industry of CECI in Benin, will discuss the importance of the economic empowerment of women to fight poverty, ensure global economic growth and improve the general well-being of populations.

Join us on March 3 at 2 p.m. EST on the Vues d’Afrique Facebook page!

She was trained at the Superieur Institute for Audiovisual Arts where she completed her Masters. She has directed various short films that have won her several awards including the Audience Choice Award at the 36th edition of Festival Vues d’Afrique in 2020. Putting down her director’s hat, Kismath fell in love with acting and has already played various roles in several short films and television series in Benin. Every year, since 2017, she has organized the Ciné 229 Awards for the Terre d’Ebène association, of which she is president. This initiative mobilized hundreds of young people during what is considered to be the biggest Beninese evening recognizing the young talent of Benin’s cinema. Kismath BAGUIRI is also one of the Women of Africa laureats. Her versatility brought her to become the Associate Manager and Director of Production for the agency ESTEEM, specialized in producing audiovisual content, publicity and communications content. In her short 27 years, this Beninese Director has accumulated experience and is well aware that to go far you must get an early start and have numerous tools in your toolbelt.

Rosy Cyr is an international cooperation volunteer, based out of Glazoué in the Collines Department of Bénin, where she is working as the Adult Education and Functional Literacy Advisor for the Project Supporting Women Entrepreneurs in the Rice Sector (PAEFFR). She has completed several mandates with CECI in Senegal as an Advisor on the management of educational projects, supporting the national literacy training organization and its key actors in the field of adult education. She has also coordinated the implementation of four literacy programs, structuring the national level, and further offering professional training in Dakar for the National Office for Professional Training. She is entering her 15th year in West Africa as one of CECI’s International Cooperation Volunteers. Working with PAEFFR since 2018, she is now participating in the project’s third literacy campaign. Her mandate is to support the literacy coordinator as they deploy, implement, monitor and evaluate the literacy campaign that will benefit roughly 700 women rice parboilers, as well as assess the transfer of knowledge to the learners.

Lionel d’OLIVEIRA, is an Agricultural Economist Engineer with 11 years of experience in the sector of community economic development. He specializes in entrepreneurship and the management of organizations. He has completed several mandates strengthening agricultural entrepreneurship, notably with Benin’s Ministry of Agriculture, Livestock and Fisheries, which has allowed him to gain experience empowering economic actors in the rural sector.

He has supported numerous women’s organizations take on their roles and challenges in the agricultural context which is more and more market focused and in which family farming must persevere and support the sustainable livelihoods of small producers. His first experience with CECI started in April 2017 in Benin as the Organizational and Business Development Expert for theProject Supporting Women Entrepreneurs in the Rice Sector (PAEFFR). Currently he is filling the role of Coordinator, working to reduce gender inequality in the rice sector. Further, he seeks to create positive conditions favoring the opening of women run businesses that are profitable, viable, empowering and improve the living conditions of women rice producers in Benin.

Next talks:
- Promoting the empowerment of women through education is #CECIforGenderEquality , on March 24.

---
Do you also wish to participate in the construction of a world without discrimination that is fairer and more egalitarian? Discover different ways to express your values on the website: https://ceciforgenderequality.ca/en