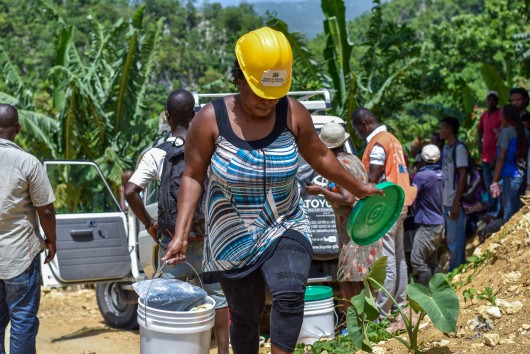 Haiti was hit hard by a powerful earthquake on August 14: 650,000 people in dire need; 130,000 homes and 906 schools demolished or seriously damaged. The media have stopped talking about it, but the needs are just as pressing!

CECI has in-depth knowledge of the area affected by the earthquake of August 14, 2021, as it is currently implementing 6 sustainable development projects in the region.

In the first days following the August 14 earthquake, CECI launched a general appeal for donations to its network of donors and raised over $240,000.  This aid made it possible to:

Today, CECI's teams are still working with the affected population to begin the post-disaster reconstruction.

Reconstruction needs are estimated at 2 billion gourdes (24.4 million Canadian dollars). After discussions with civil society organizations in the affected region, CECI has targeted the following actions :

Contribute to this campaign and join CECI so that the lives of families in the Grand Sud of Haiti can return to normal!

A big thank you to all the contributors!