“Working Together, Hand in Hand” Overview of a Haitian Mission in Canada 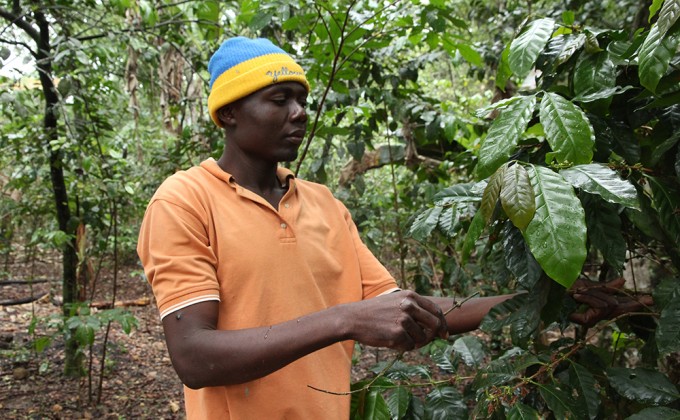 From April 12 to May 2, two partners in the Volunteer Cooperation Program (VCP – Haiti) took part in a south-north exchange between Haiti and Canada: the Association des Jeunes Entrepreneurs agricoles du Nord (JEAN) and the Coopérative Agro-Artisanale des Femmes en Action (COOPAAFA).  These two Haitian organizations, one working in agricultural production for exchange (beekeeping, animal husbandry and vegetable production), and the other in the processing and distribution of food products and crafts, had the opportunity to visit various Canadian agrifood facilities. A total of six Haitian nationals travelled to Canada—four members from JEAN and two from COOPAAFA.  Both partner organizations said they benefited from this exchange.

“The north-south mission was very interesting and rewarding,” said Thélémaque Wilfrid, president of JEAN and exchange participant. “When we hear about something without seeing it, it’s like the difference between theory and practice. [With this exchange] we were able to see things that were different from what we see in Haiti.” Geoffrin St-Louis, president of COOPAAFA, echoes this sentiment: “If someone had to come and sit for five or six months [to tell us about it], we wouldn’t have learned as much as we did, because the fact of seeing and experiencing it is what leaves an impression. When you’re just sitting and listening, a great deal gets forgotten, but when the brain and memory experience something, it sticks with you—for a long time.”

During their 10-day trip, the group visited farms, greenhouses, cooperatives, processing plants, schools and the Union des Producteurs agricoles (UPA) in Quebec.  While touring the province, they had the opportunity to meet Patrick Dilmé, who teaches handicrafts at the Centre de formation agricole de Mirabel. This highly respected Haitian-born teacher has lived in Canada for more than 40 years and taught at the Centre for seven years. Both Mr. Wilfrid and Ms. St-Louis were very impressed by the meeting and clearly remember what he told them about the 3PA rule for success: Passion, Precaution or Prevention, Planning and Action. “I learned this, and it’s stuck with me,” said Mr. Wilfrid.

Goats, or cabri, as they are known there, are also plentiful in Haiti, so it’s no surprise that the Chèvrerie des Mines, near Quebec City, was a high point of their trip. Goats are raised very differently in Haiti. The animals are free to wander just about anywhere, and nature is allowed to take its course. Once they are mature, they are slaughtered for meat. Elmise Jean-Jacques from JEAN talked about his experience: “I learned a great deal about raising goats. They’re not the same variety as we have. We learned about production and gestation. We received information on how to know when goats are ready to be bred.” Ms. Jean-Jacques hopes to gradually put this into practice, as means allow.

Gérald Charles, also from JEAN, noted the differences in the way the animals’ habitat is organized: At home, our goats are free ranging and can wander the fields. In Canada, there is a well-ordered structure. The way the goats are fed and the way their feed is prepared is very different from what we do. The goats have special living quarters and are categorized according to a well-established order.”

The VCP-Haiti partners went home with new ideas that they will now try to put into practice. As well, they established a partnership following their meeting. “There are products in the north that interest us. JEAN will do the research and send us its findings. Take the example of chocolate: we know that the best chocolate comes from the north. In return, JEAN will promote COOPAAFA’s products, including turmeric, essential oils and millet (which are hard to find or unavailable in the north). “We weren’t expecting this,” said JEAN’s president, “but it’s a great new initiative to encourage exchanges within the same country.”

The south-north mission opened the door to new ways of seeing things. Haiti will not change overnight, but there is always hope that things will get better. This mission also helped create a business relationship between two organizations in the same country. As Thélémaque Wilfrid aptly remarked: “To move forward, we need to work together, hand in hand.” It looks like they’re already off to a good start!