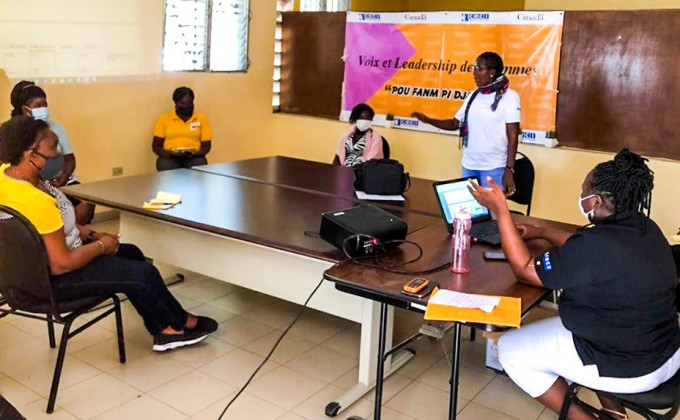 “In the month of April, a young woman checked in at the Ouanaminthe hospital with an asthma attack. The population tried to stone her because she was showing symptoms similar to those of the coronavirus. The police had to intervene to save her life,” reports Roseleine Pierre, coordinator of the Rassemblement des femmes engagées de Ouanaminthe (RFEO).

Situation Related to COVID-19 in Haiti

The first cases linked to the coronavirus pandemic were recorded last March in Haiti and, according to official data, the disease has since been progressing slowly throughout the country, with 88 confirmed cases as of May 4, 2020. But in the absence of sufficient screening tests, it is likely that these figures are grossly underestimated, as recognized by the Haitian Ministry of Public Health.

Haiti was initially spared from this pandemic, in part because of the political crisis that deters foreign tourists from travelling to the country. But the return of Haitian workers fleeing the virulence of COVID-19 in neighbouring Dominican Republic now poses a considerable sanitary risk in the country’s northeastern region, especially in the border town of Ouanaminthe.

Since the initial outbreak of the epidemic, the Haitian president has announced measures to limit the spread of the virus in the country: curfew from 8 p.m. to 5 a.m., ban on all gatherings of more than 10 people, school and factory closings, and suspension of international flights.

No strict confinement was imposed, however, because a large part of the Haitian population depends on the income generated during the day to meet their basic needs and those of their families. In addition, the ban on gatherings is ill-respected, especially in the public transportation system, which remains crowded in large cities.

Mitigating the Lack of Sanitary Awareness

“Despite the efforts of the Haitian government, the population of Ouanaminthe is not at all sensitized to the issue of the coronavirus. Some believe that the virus is a story told by the government to attract international aid. Others argue that the coronavirus will not infect us Haitians, given the popular belief that we are resistant to microbes. I believe that only a tiny fraction of the population has changed their behaviour by adopting the recommended preventive practices, such as hand-washing and wearing a
mask,” explains Roseleine.

There is an urgent need to build awareness in the country about the protective actions that must be taken. It is for this reason that the Women’s Voice and Leadership project in Haiti (WVL–Haiti) has taken the initiative to increase its support to the RFEO and five other women’s organizations in the Northeast, in an attempt to strengthen the families’ awareness of COVID-19 prevention measures.

These partner organizations have well-established, close ties with the communities in which they work, enjoying great credibility with the local population. As such, they are especially well positioned to transmit health advice and encourage the changes in behaviour necessary to slow the progression of the coronavirus.

“The women’s organizations in the Northeast have decided to pool their efforts to communicate the State’s messaging in the areas where they work. We will use several means such as radio broadcasts, neighbourhood entertainment, and even theatre,” adds Roseleine.

The RFEO, of which Roseleine is the coordinator, is a local organization comprised of 80 members. It aims to fight against gender-based violences and to support the women victims of such violences, namely through economic empowerment. This mission has taken on a new meaning in the current context linked to COVID-19.

“The slowdown in economic activities in Ouanaminthe has raised tensions within families and is causing an increase in cases of domestic violences. Textile factories have temporarily closed, with only three of them restarting to fulfil protective mask manufacturing contracts. The public markets only open three times a week. Unemployment makes men frustrated, and they let it out on their wives,” explains Roseleine.

Over the course of 2019, the RFEO had received financial support from the WVL–Haiti project to set up a database to record the cases of violence reported in the commune of Ouanaminthe and the other cities of the Northeast. Today, this tool is used to measure the undesirable impacts of the COVID-19 preventive measures on the safety of women and girls.

“In the past, over a given month, we would record four or five cases of violence,” says Roseleine, “but during the period of March 19 to April 22, we listed 13 cases in Ouanaminthe, including the rape of a minor and 12 cases of domestic violence.”

For several weeks now, the RFEO has reacted by intensifying its awareness-building activities against gender-based violences and by collaborating with other local organizations to offer adequate support to those women and girls affected, as Roseleine explains: “We combine prevention messages to face COVID-19 with awareness-building initiatives to prevent violences. For the cases already registered, the women’s organizations will work together based on their area of expertise. RFEO only offers
information, listening and referral services. We have already built alliances with other women’s organizations of the Northeast for psychological, medical and legal support as well as temporary accommodation, when necessary.”

Over the next few weeks and months, the WVL–Haiti project will support 13 women’s organizations to promote the health precautions recommended by the Haitian state to combat COVID-19, while continuing the essential work of raising awareness on gender-based violences. The WVL–Haiti project team will also remain attentive to the evolution of the situation to adapt its programming again if necessary.

Make a donation today to our COVID-19 Emergency Fund to support our efforts with our partners around the world.

The WVL–Haiti project supports women’s organizations and community networks that work to promote the rights and empowerment of women as well as gender equality in Haiti. It receives financial support from the Government of Canada through Global Affairs Canada.