Sustainable tourism: A Uniterra partner in Bolivia shares its experience 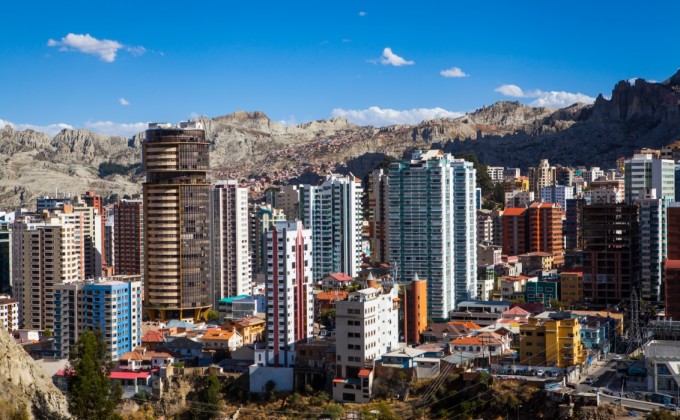 December 2014: The La Paz municipality, headquarters of the Plurinational State of Bolivia, has been designated one of the New7Wonders Cities in the world by the New7Wonders Foundation. Listed alongside Beirut, Kuala Lumpur and Durban, La Paz
was selected from more than 1,200 nominees and has opted to use this distinction to strengthen its position on the international tourism scene. The municipality has created the La Paz Maravillosa Municipal Tourism Development Agency and launched a planning strategy. It quickly identified handicrafts as a cornerstone of tourism development and prioritized the industry’s development and promotion. With support from WUSC and CECI’s Uniterra program, the agency has launched several development projects in cooperation with Andean communities. As 2017 comes to a close, proclaimed by the United Nations as the International Year of Sustainable Tourism for Development, Patricia Grossman Sáenz, Director of La Paz Maravillosa, talks about these projects supporting community development, and the issues and challenges they raise.

Last year, Bolivia welcomed more than 1.2 million foreign visitors—a figure that has steadily risen to more than double what it was 10 years ago. Until recently, there were just a handful of Bolivian handicraft shops in La Paz catering to tourists’ appetite for authentic, quality products. Many tourists would end up taking home knockoff souvenirs, either made from non-traditional materials or that imported from other countries! To take on this issue, La Paz Maravillosa, the area’s municipal tourism development agency, is working to optimize the experience of tourists visiting La Paz by improving their access to and appreciation of local craftsmanship.

In 2016, the agency entered into a partnership with Uniterra, a volunteer cooperation program jointly operated by WUSC and CECI that supports the development of inclusive economies that benefit women and youth by fostering growth and change in markets that affect marginalized people.

In 2016-2017, three Uniterra volunteers worked with La Paz Maravillosa on enhancing the marketing and customer service skills of Bolivian artisans. The agency provided training on graphic design (creation of advertising leaflets), marketing, social network management, and customer relations management, in addition to assisting in the creation and promotion of 100% Bolivian handicraft tourism routes.

Currently, Uniterra volunteers are working with La Paz Maravillosa to create an agency website and mobile application to raise its profile online and and give visitors a platform to exchange information, recommendations and comments. The aim in such efforts is always to establish links between the handicraft and tourism industries.

Handicrafts as a Driver of Economic Development

Patricia Grossman Sáenz, Director of La Paz Maravillosa, says she is convinced that tourism can become a driving force of economic development in La Paz. She also says that handicrafts transmit the identity, culture and values of the municipality. “We want to change the handicraft industry by focusing on economic development, jobs and revenue. We want handicrafts to become a hallmark of our city,” she explains with conviction. “Our goal isn't just to draw tourists, but also to use handicrafts to expand our urban tourism offering, for example, by opening souvenir shops, so that the entire city benefits.”

According to her, this is not a purely commercial endeavour. “We are giving artisans a chance to develop their businesses by enhancing the quality and range of their products through more a more structured, developed offering. Our aim is to strengthen our communities. We want to help people stay in rural areas and economically empower women and youth so that they feel confident in their own development, and in their futures.”

For several months, La Paz Maravillosa has been working with three high-mountain communities to design and implement development projects between the handicraft and tourism industries. The largest project supports community and economic development in the communities of Chacaltaya and Huayna Potosi and has received CA$200,000 in funding from the Programme Québécois de Développement International (PQDI). The project aims to improve the socio-economic well-being of women and young people through better access to the national market and through three new local handicraft shops.

A breath of fresh air

The goal of the projects is to promote local handicraft traditions and enhance the appeal of the tourism industry in high mountain areas. “Quality is important but it’s not everything,” says Grossman Sáenz. “The communities need to realize that handicrafts have cultural significance, and that they must also have value. They are a means of sharing our culture. The object is a doorway to culture. We must work to change the mentalities of the communities working in handicrafts so that they become aware of this and understand that tourists sincerely want to know them better and are seeking a deeper relationship."

But this takes time, listening and real cooperation. The process is anything but simple and presents a real challenge. “Andean culture is very closed, and for obvious historical reasons there is an attitude of distrust and resistance. We must take the time that is needed, and a lot of precautions, as not everyone in the community shares the same vision. This can create very strong divisions,” says Ms. Grossman Sáenz. She advocates a new way of supporting and guiding communities, rooted in participation and empowerment. “It is no longer enough to expect that communities follow the recommended processes. Now they need to understand why development matters, and that they must decide for themselves what to do with it. We need to generate interest, and it is happening, bit by bit. The communities are starting to ask us for support. There is a growing entrepreneurial spirit here.”

Enough to encourage young people, who previously had been forced to leave their communities due to a lack of economic prospects, to consider staying in their communities. Their involvement in handicraft and tourism development projects is essential, as highlighted in a recent study conducted by 21 young leaders from Canada and Bolivia who gathered in La Paz last summer for the 2017 International Seminar. The report was submitted to the partners and the La Paz municipal authorities and was shown to the city’s mayor to impress upon him this new vision of sustainable tourism.

Patricia Grossman Sáenz wants to build a tourism industry that is firmly rooted in respect. This is a word that has come up again and again in her work since she arrived in Montreal last October. Grossman Sáenz, along with five other partners in the Uniterra program working in the tourism industry, was part of a 10-day trade mission organized for the International Tourism and Travel Show in Montreal to encourage the partners to develop business relations and build their capacities. She met with representatives of the Économusée Network, a tourism interpretation centre being built in Paz by the Groupe de Collaboration Internationale en ingénierie, an engineering group at Université de Sherbrooke, with support from the Uniterra program. At some point, the space could be repurposed to allow tourists to observe the different stages of handicraft production.

At a conference that CECI organized in partnership with Village Monde, an associate member of CECI and partner of the Uniterra program, Ms. Grossman Sáenz gave her definition of sustainable tourism. “It means respecting groups and communities. It is respecting their beliefs, mentalities, and ways of life,” she explained before the 100-person crowd gathered at the Monument-National theatre to discuss the theme, “A Different Way to Travel: When Tourism is Used for Development.” “But sustainable tourism is also about tourist attitudes. People shouldn't just come here for the experience. We have this notion that we need to cater to tourists, as if they were worth more. But tourists also need to think about the people they are visiting. Both sides need to do their part to meet in the middle. This is also what sustainable tourism is about—an exchange.”