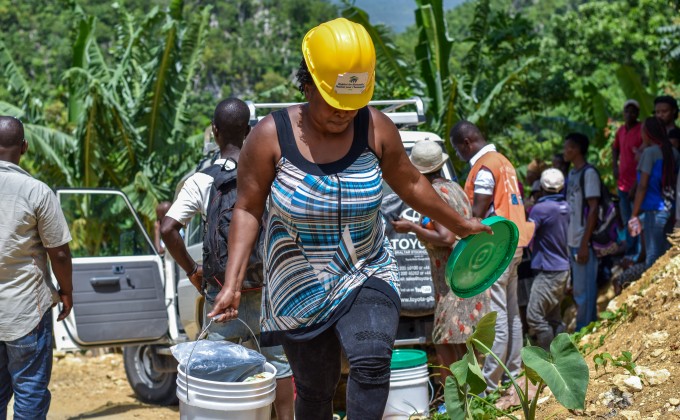 Montreal, January 26, 2022 - The southern part of Haiti was hit hard by a powerful earthquake on August 14, 2021, followed by another one on January 24, whose consequences are pending. The country still needs help to ensure the population recovers quickly. To reach this goal, the Centre for International Studies and Cooperation (CECI) wishes to work hand in hand with representatives of Quebec’s Haitian community in order to raise as many donations as possible and assist the population of the affected region.

In real terms, 650,000 people are still in need, while 130,000 houses and 906 schools remain demolished or seriously damaged and still need to be rebuilt.

“CECI has been present and supportive during several events that have distressed the country, including for the reconstruction that followed the 2010 earthquake”, explained Philippe Dongier, CECI's Executive Director. “We have thus developed local partnerships and an in-depth knowledge of the context which allow us to be effective.”

As part of its campaign, CECI has called upon members of the Montreal community to form a campaign cabinet of business sphere volunteers, most notably from Montreal’s Haitian community. These men and women will use their networks to raise funds for CECI. The help of these volunteers, who are affected by their home country’s challenges, will be invaluable in identifying partners for the tactical activities of the campaign.

The cabinet launches with the following individuals:

To help support the voice of the Haitian community, dancer, host and comedian Erich Preach has also joined CECI's donation campaign: “I am very happy to partner with CECI and help raise funds in order to assist Haitians who have been affected by the latest earthquake. I want to share with my colleagues of Haitian origin, here in Quebec, the importance of being generous according to their means and of helping relieve the country. These are our roots and we must not forget them!”

For 50 years, CECI has been a major player in supporting the development of Haitian communities, with a presence across 70% of the country, including the three southwestern departments affected by the August 14 earthquake.

Reconstruction following a natural disaster always takes a long time, especially in countries where the population is already living in a precarious situation in terms of human and food security. CECI often intervenes up to three or four years after a natural disaster, whether to rebuild infrastructures, revive agriculture that is more resilient to climate change or support women and youth in new income-generating activities.

About CECI
CECI is an international cooperation organization founded in 1958 that combats poverty, exclusion and inequality through sustainable development projects in Africa, Asia and the Americas. For more information: ceci.ca