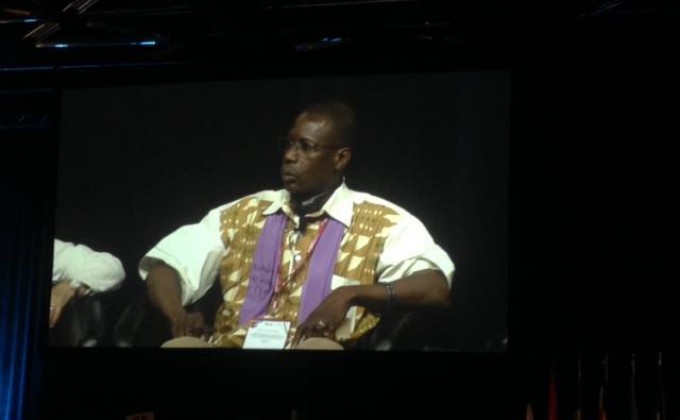 The Global Social Economy Forum took place from September 7 to 9 in Montreal. Some 1,500 participants from 62 countries came to demonstrate their commitment to social and solidarity economy and confirm that “there is a model for economic development that puts people the centre of economic, social and political activity.” Two of said guests were representatives from RENAPESS, Mali’s nation-wide network for the promotion of social and solidarity economy, and long-time partner of CECI. We met with the network’s president, Madani Koumaré.

More respect and consideration—this is what Madani Koumaré wants to see through social and solidarity economy (SSE). He has been working toward this goal for years in his home country of Mali, as well as internationally (1). A 50-year-old economist, Koumaré has tirelessly worked to spread a message: “This is not a separate sector, nor is it part of a discount economy. It’s a real economy, especially in our countries. It is the best solution for ¾ of the population in Africa!”

Koumaré had been volunteering and been a program manager for RENAPESS since its founding (2003) when, in 2011, he was appointed president of the network. Today, the network brings together nearly 70 of the country’s largest organizations, including associations, NGOs, cooperatives, mutual companies, unions and federations, for a total of nearly 3.5 million people. Its work focuses on facilitating access to markets and promoting dialogue to empower its members to act and to protect their rights, with the ultimate objective of advancing the cause of SSE.

CECI has worked alongside RENAPESS since it was founded, sending volunteer cooperants to Mali to share their expertise through specific mandates. It also supports a project launched in Bamako in 2013 by providing guarantee funds (through the Armande Bégin fund) so that women who want to start an entrepreneurial activity can obtain loans from lending institutions. Koumaré shared about this experience at a Forum workshop, explaining that the initiative gave 1,200 women access to micro-credit and provided follow-up on their projects. Yet, while the president of RENAPESS praised this successful initiative, he expressed frustration that it hasn’t been reproduced elsewhere—not for a lack of interest, but funding.

In October 2014, after five years of consultations and lobbying, Mali adopted a national SSE policy and a five-year action plan to implement it. Koumaré readily admits that his country is a major player in Africa’s SSE. “The State very quickly realized that SSE was a strategic sector and the key to its fight against poverty, so it was very open to developing a national policy. We created a network early on and quickly set up an institutional partnership with the government, which, in 2000, established SSE week. All of this has made for fertile ground.”

Koumaré recognizes that the adoption of such a policy has led to legislative changes, like reconciling Mali’s laws governing public market access and cooperatives with African law. The policy also led to the implementation of a more sustainable funding system and actions to raise public awareness about SSE.

But Koumaré says he is far from satisfied. “Getting the funding to implement this plan is a major challenge,” he explained. According to him, the political and security crisis that has gripped Mali since the coup d’état in March of 2012 should not hinder the application of the five-year plan. “On the contrary, this is an opportunity, because the victims of these events need to be reintegrated. It’s a matter of choice and political priority. The SSE is not where it should be on the political agenda and cannot reach its potential this way,” he criticized.

Koumaré says that SSE activities are nonetheless taking place all around us, outside of the public and private sectors. Two thirds of Malian professionals work in SSE. “We’re talking about all of the people working in crafts, carpentry, agriculture, fishing, urban transportation, building trades, etc.” In urban centres, an estimated two in three families work in ESS activities. “Employment, health, procurement, housing—all of these are provided by SSE actors,” explained the president of RENAPESS, who welcomed the mayor of Bamako to the Forum. “Life in the city would be unimaginable, unlivable without the work of SSE actors.”

This third Global Social Economy Forum, which was co-organized by the Chantier de l’économie sociale and the Ville de Montréal, primarily focused on cooperation between local governments and social economy actors to better face today’s challenges in urban development. Forum participants hailing from 330 cities sent a resounding message, that “a smarter, more equitable and more sustainable city is possible.” And Madani Koumari adds, without losing sight of our goal, that “every person should be able to maintain their dignity, as much as possible and at all times.”

(1) He is also president of the Réseau africain d’économie sociale et solidaire (RAESS) and a member of the International Network for the Promotion of Social Solidarity Economy (RIPESS).

The Global Social Economy Forum (GSEF) took place on September 7 - 9, 2016, bringing together some 1,500 people from around the world to discuss and work on collaboration between local governments and the social economy for the development of cities. The forum was co-organized by the Chantier de l’économie sociale and associate members of CECI.

CECI was pleased to welcome three Uniterra program partners from Mali and Bolivia who work in social and solidarity economy. In addition to actively participating at the GSEF, Madani Koumaré, Baba Cissé and Alicia Canaviri met with Quebec organizations to discuss ways to strengthen ties of solidarity.