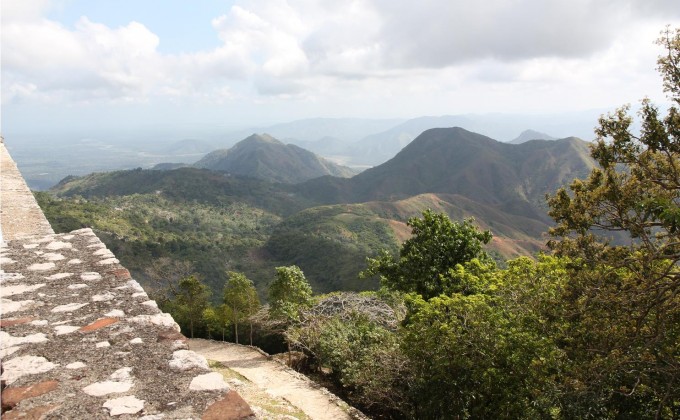 CECI has received $1 million in financial assistance from the Government of Quebec to carry out a project to combat climate change in Haiti's Nord department. CECI is teaming up with Quebec company Viridis Terra Innovations and expert local partners to implement a three-year project aiming to reduce greenhouse gas emissions by setting up a system for recycling organic waste through composting and creating sustainable energy forests.

The KLIMA project will support local communities and partners in Cap-Haïtien in their efforts to combat climate change and provide coaching for the development of a green, sustainable economy. The CECI-Viridis Terra Innovations (VTI) consortium will carry out the project with financial backing from the Government of Quebec and in cooperation with the Uniterra program. The project has two major components and will also provide training and raise awareness among the affected populations.

The first component aims to reduce greenhouse gas (GHG) emissions caused by deforestation and heavy charcoal use, thereby reducing pressure on forest resources. In Haiti, nearly 98% of the land has been deforested in just over two centuries of unsustainable resource exploitation. Deforestation has significantly reduced the resilience of Haiti’s ecosystems, causing severe land erosion and desertification, problems which only exacerbate the impact of climate change on communities. The excessive of wood resources and the continued environmental degradation that has ensued has left the Cap-Haïtien region highly vulnerable to increasingly extreme weather events. Some 117,000 tonnes of wood charcoal are required each year to meet the population's needs, putting massive pressure on forest resources.

The KLIMA Project draws upon CECI's experience and network in Haiti and on VTI's technical expertise to plant and develop productive, short-rotation energy forests. These sustainably managed and operated forests will improve the resilience of ecosystems on degraded non-agricultural lands and provide a new source of renewable, carbon-neutral energy. The pilot project will reduce deforestation pressure on about 80 hectares of natural forests per year.

The second component of the KLIMA project involves setting up a pilot system for organic waste management and recycling through composting at Cap-Haïtien’s dump sites. As the second largest city in the country and with a population of 442,000, Cap-Haïtien produces 80,700 tonnes of solid waste every year, which are taken to the dump site in Fort Saint-Michel. Two thirds of this waste is organic. This is a massive amount of material that has potential for transformation into eco-industrial compost—an estimated 1,400 tons could be produced each year through the pilot system. The two main objectives are to reduce methane emissions from organic waste deposits (a greenhouse gas 21 times more powerful than CO2 in global warming potential) and to generate a significant source of green manure for the region's farmers. The compost will be used as organic fertilizer, particularly among banana producers, and replace the use of chemicals imported from the United States. In addition to directly and indirectly creating jobs, composting organic waste will have a direct impact on sanitation in the greater Cap-Haïtien area and will support the region's agri-tourism development.

The KLIMA project therefore increases the local, sustainable supply of products, such as carbon-neutral energy wood and eco-industrial compost (green fertilizer), while reducing GHG emissions and increasing the resilience of ecosystems.

To mobilize communities and raise awareness on the fight against climate change, the project will carry out a number of awareness-raising and training activities on climate issues and adapt them for Haiti’s Nord department. Conferences and workshops will focus on forest conservation, carbon-neutral energy wood, organic waste recycling and climate-resilient agroforestry.

To ensure strong community buy-in for fighting climate change and that actions are tailored to the region's needs, we designed the project by working closely with local partners, who will see their capacities strengthened throughout the project.

One such partner is the Young Agricultural Entrepreneurs of Nord (Jeunes Entrepreneurs Agricoles du Nord, JEAN), who will provide technical support in the final selections of tree species, demonstration workshops on good practices, transformation of wood energy using energy-efficient carbonizing school ovens, etc. The Youth in Action Organization (YAO) will work on implementing the pilot system for sorting waste and composting, and compost production and sales.

“CECI relies on strong local partners to support the project’s implementation, but also on a participatory process whereby local populations benefit from the green economic activities created through this project,” says Claudia Black, CECI's Executive Director, who also reminds us that the NGO has been present in Haiti since 1971 and has worked in the country’s Nord department for a decade. “By putting in place the key mechanisms for raising awareness and mobilizing the public on the major issues
relating to climate change and the environment, this project will lay the foundation for good governance in the waste management sector and will support the installation of productive, sustainable energy forests.” Black also emphasizes that the KLIMA project is aligned with Haiti's objectives to reduce its GHG emissions by 31% by 2030.

The KLIMA project was selected under the International Climate Cooperation Program of the Ministère du Développement durable, de l'Environnement et de la Lutte contre les changements climatiques. It is made possible with funding from the Government of Quebec as part of the 2013-2020 Climate Change Action Plan, which is funded by the Green Fund. The project’s budget is nearly $1,400,000 and is expected to begin operations in November.