Haiti: A celebration to honour successful students and schools in Artibonite 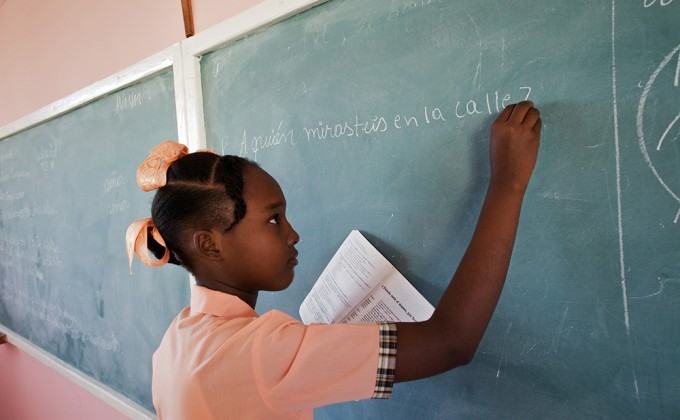 This past September 18th, the principals, inspectors and student honorees from some thirty schools in the Department of Artibonite gathered together in Gonaïves. In view of the exploit of a 100% pass rate at the 9th grade examinations in June 2015, it was a time for celebrations with a ceremony that also honoured the four student with the best exam results in the Department! Representatives of the Volunteer Cooperation Program (VCP) were in attendance as guests.

Joseph Mathieu, the master of ceremonies and Coordinator of Basic Education at the Department of Artibonite’s Education Directorate (DDEA), emphasized the importance of improving the quality of education in schools at every level, as did the other speakers.

“If some fail, we all fail. If some succeed, we all succeed.”

Many speakers pointed out the significant contribution in recent years of the VCP and the Fondation Paul-Gérin-Lajoie in relation to school governance, education and pedagogy.

VCP Regional Coordinator Wiston Guillaume mentioned the linkages between economic development and education. As for Christiane Bruyère, also a Regional Coordinator, she reminded the audience that success in education implies motivated students, trained and dedicated teachers, school principals who are present, school inspectors and a supportive Education Directorate.

The gathering concluded with a ceremony in honour of the top four students. Each was presented with a tablet computer. In addition, each school that achieved a 100% pass rate during the 9th grade examinations was awarded a 2016 edition dictionary.

Not only did this ceremony celebrate success stories in education, but it was also a testimony to the fruits of cooperation.