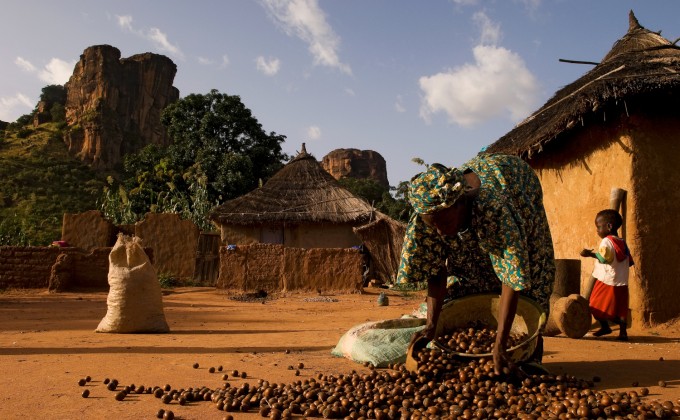 In Burkina Faso, the shea industry is the source of income for 1.5 million people, 90% of whom are women. However, the shea tree is weakened by climate change and its impacts, such as droughts, high temperatures, dust storms and strong winds. Other challenges facing the sector include the aging of the trees, pest attacks and the use of shea wood as a source of energy. Finally, the country's efforts to make the sector more resilient to climate change are weakened by the lack of weather and climate information.

The Women’s Resilience to Climate Change in Shea Sector Project in Burkina Faso aims to increase women’s resilience to climate change, particularly those involved in the collection, processing, and marketing of shea products in the rural regions of the Centre-Ouest and Hauts Bassins. Carried out between July 2018 and June 2021 by CECI, the project impacted more than 3,000 households directly and more than 15,000 Burkinabes indirectly.

The project provided training and technical support for the implementation of alternatives to fuelwood, including enhanced pyrolysis, a technology that converts organic residues into biochar, which is particularly useful for restoring degraded agricultural soils. When made into briquettes, biochar is more energy efficient than charcoal.  Two semi-industrial biochar production units managed by women have been set up in order to valorize the residues of the shea butter industry and improve access to biochar briquettes in the villages.

A strategic activity of the project was to use existing climate data and local knowledge to develop projections for the shea tree. Local populations were then coached to interpret these projections. In addition, sustainable management practices for shea parks were demonstrated and shared locally. One example is the installation of beehives in the parks to improve pollination and create an additional source of income for the women. In addition, cost-benefit analyses have been produced to optimize agricultural practices in these areas.  Special attention is given to women's agentivity. Their leadership is recognized and put forward to allow them to have a key role in this project.

- 4,236 people, 98% of whom are women, members of organizations of shea producers and processors,were trained in agro-silvicultural - practices adapted to climate change
- ​42 demonstration plots for shea tree nurseries were set up;
- 320 improved stoves were distributed;
- More than 210 beehives were installed in shea parks;
- 30 local institutions and 35 community leaders were accompanied in the interpretation of climate projections

"We are very pleased to have received financial support from the Government of Quebec to implement this project. CECI has been operating in Burkina Faso since 1985, and the shea butter industry is one of its most important in the country. Significant progress was in preserving the environment by promoting good practices and acquiring new techniques. This project is in line with this approach and will allow the communities targeted by the project, especially women, to be better prepared for the impacts that climate change will have on their environment and, consequently, on their social and economic lives.” - Claudia Black, former Executive Director of CECI

The most important spin-off of the project for CECI is the recognition and legitimacy acquired in the fight against climate change in the shea butter industry in Burkina Faso.  The approaches and technologies put forward by the project offer concrete solutions to problems that have long been part of the daily life of women shea producers, such as the use of charcoal as an energy source for the production of shea butter or the management of residues from the processing of shea kernels. Improved pyrolysis offers a sustainable solution to both of these problems, as it allows the transformation of residues into biochar, which in turn replaces charcoal as an energy source.