Fanm Deside: an organization that fights to improve the status of women in Haiti 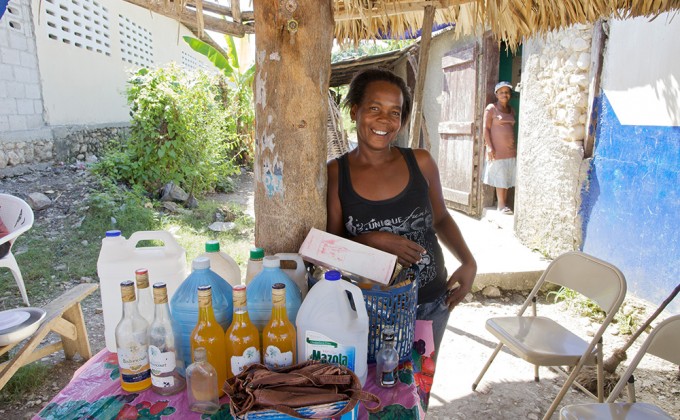 Fanm Deside accompanies and supports women in need. It is an advocate for their rights with different governmental institutions and non-governmental organizations. It is active in public education against violence, in activities related to women’s health and in promoting gender equality. In addition, Fanm Deside offers shelter to women victims of domestic violence in Haiti’s Southeast Department. This Haitian organization has started projects of an economic character to improve women’s lives: microcredit services, credit unions, plant nurseries, workshops to manufacture, process and sell goods (plants, creams, fruit drinks, instant coffee, clothing, etc.).

Founded in 1989, in Jacmel, Haiti, Fanm Deside is a major reference organization in relation to the promotion and defence of women’s rights. “Originally, Fanm Deside was a group of thirteen Haitian women and four Canadian nuns. These thirteen women, residents of a working class neighbourhood in Jacmel, were confronted with problems related to their direct needs: access to potable water, paying rent, their children’s transportation to school, etc.,” explains Marie-Ange Noël, a member of Fanm Deside’s Executive Committee. “With encouragement from the four nuns, they formed an association in order to be better heard by society and to find solutions. Their efforts gave birth to Fanm Deside.”

Today, Fanm Deside has nearly 4,000 members, including 700 active members in the City of Jacmel. It is active in eight districts in Haiti’s Southeast Department.

According to Nadia Lafleur, director of the Magalie pour la vie women’s shelter and a member of Fanm Deside, there are four components to the latter’s struggle to improve life for women in Haiti. The organization organizes information and sensitization activities for women and men in schools, as well with medical authorities and personnel in the justice system. Also very important is the creation of income generating activities to economically empower women. In effect, the organization has, in recent months, set up a small poultry farm, a credit union and a micro credits service. The third component is advocacy in favour of women’s rights. The final component: accompanying women and girls who are victims of violence. In addition to its medical and legal dimensions, this support takes the form of a women’s shelter – Magalie pour la vie – which accompanies traumatized victims of domestic violence on a long term basis as it helps them to rebuild their lives with counselling and leisure activities.

Fanm Deside and the Volunteer Cooperation Program (VCP): a collaboration with proven results

Marie-Ange Noël and Nadia Lafleur do not hesitate to mention the very positive effects of the collaboration between Fanm Deside and the VCP: “It was a great help in our internal organizational assessment. We discovered our strengths and weaknesses. That enabled us to make improvements by working more as a team. VCP was also very helpful in terms of income generating activities, an area where we had no experience. The poultry farm is a good example. However, much remains to be done and I’m happy they’re extending their program. We still need consulting assistance. We still want to learn and innovate.”

In effect, it is the mission of the Volunteer Cooperation Program (VCP)  to support Haitian partners to enable them to better respond to the needs of target populations. This support takes the form of dispatching qualified Canadian advisors.

Sébastien Beaudet was one of them. For two and a half months he was a volunteer advisor to Fanm Deside. In his view: “It’s a well-structured and demanding organization. I consider myself lucky to have had the opportunity to be a part of it. The women working there know where they’re going. Also, they’ve instituted participatory management. As a result, all employees feel like integral parts of Fanm Deside, which they speak of as ‘their organization.’ It was truly a wonderful experience working with them. Not only do they address life’s problems and challenges, they act proactively to prevent them and to change mentalities.”

“Today, women in Haiti who are victims of violence feel freer to speak out. In the past, they were afraid and faced difficulties getting their voices heard. In part, this was because organizations were mainly run by men who didn’t let women express their views. Today, there are more women heading organizations.”

Another important change has been the evolution of how the justice system and the police collaborate with organizations like Fanm Deside. In addition to the basic collaboration that existed in the past, the police now refers cases to these organizations. According to Nadia Lafleur: “Women’s issues are now more part of the public conversation, more acknowledged by society. For example, whereas formerly it was a struggle to commemorate the International Day for the Elimination of Violence against Women on 25 November, now journalists come to us to talk about it.”

Much remains to be done to effect deep changes in mentalities. This is why the VCP’s teams deemed it important to support an organization like Fanm Deside and provide it with the tools needed to further improve the status of women in Haiti.