Alicia Canaviri: The recent advances of social and solidarity economy in Bolivia 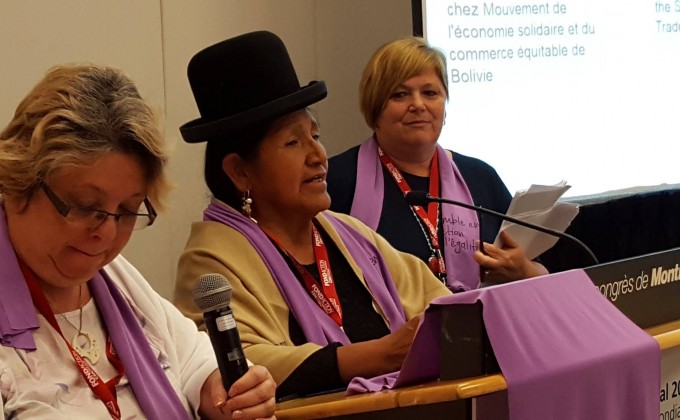 Hundreds of people attended this year’s Global Social Economy Forum, including several of our partners. One such attendee was Alicia Canaviri, president of the Bolivian Social Solidarity Economy and Fair Trade Movement (MESyCJB), where CECI has been sending volunteer cooperants since 2005. Self-educated and committed to her cause, Canaviri spoke with us about the movement’s recent advances in her country.

The news came to her by way of a phone call the night before she left for Montreal—the government of Evo Morales finally The news La nouvelle lui est parvenue par téléphone laThe night before she left for Montreal, Alicia Canaviri received a phone call with the news—the government of Evo Morales had, in early September, finally signed a formal, legal recognition of MESyCJB. After four years of political struggle and sustained activism, primarily with public and ministry authorities who knew little about social and solidarity economy (SSE), Canaviri welcomed the announcement with restrained satisfaction. “The lack of any legal recognition was major hindrance to our ability to act. We were like a person who was never issued a birth certificate,” explained Canaviri, who has been president of the movement since 2013. “Now we will be able to benefit from government assistance, carry out capacity-building projects, obtain grants and bank loans, etc.” Canaviri explained. Still, while this recognition is crucial, it is but “a first step. Now we have the opportunity to pursue our actions to the fullest and reach our goals. The real work has only just begun.”

This outlook does not faze the 60-year-old Bolivian, who has worked for justice and women’s rights for forty years and demonstrated uncommon drive throughout her life. Canaviri was born in an ayllu (1) near Salar de Uyuni. She was sent to school at age eight to learn Spanish, but stopped after three years to help her parents, who grew quinoa and raised camelidae. At age 12, she went with her mother to give cooking and weaving workshops to women’s groups. “I would teach these women in exchange for food,” she recalled. Two years later, upon the advice of a social worker, she left home to receive training and began working as an assistant to social workers, which she would continue to do for nearly 10 years.

Her life took a turn when, at age 23, she enrolled in a business administration and accounting institute in La Paz. To fund her studies, she worked as a street vendor and a maid. She eventually wound up working as a social worker in an NGO involved in broadcasting radio shows on the rights of Aymara women. The radio administrator immediately took notice of her and made her a journalist! At age 25, she had started on a new career path.

In addition to raising her four children and taking evening classes to earn her high school diploma and university degree, Canaviri worked for nearly 25 years setting up multiple radio and television programs to educate and raise awareness about the rights of indigenous people and Aymara women, and created two radio stations in La Paz. Since 2005, she has become even more involved in organizations like the Centre for the Holistic Development of Aymara Women. And, of course, she has continued to work for MESyCJB, which was officially founded in 2008 and today counts more than 140 organizations involved in agroecological and organic production (crafts, textiles, wood, leather, jewelry, etc.).

The MESyCJB works to build up an alternative economy to the capitalist system. In July of this year, the group joined forces with four other organizations to give more weight to its requests. “Together, we are asking to government to approve the 2008 law on SSE, which still has not been ratified, put a special government authority into place and create a national fair trade label,” explained Canaviri,who made no secret of her ultimate goal—to see a revision of the Bolivian commercial code. She would also like to set up campaigns to raise public awareness about SSE issues and conduct research to document the movement in Bolivia. “There is very little recorded in writing,” she lamented.

While MESyCJB was only recently formalized, SSE roots run deep in Bolivia. “It is rooted in Andine culture, which is based on the values of reciprocity, complementarity, solidarity, spontaneous mutual aid and communal work. The very philosophy behind the movement comes from indigenous culture.” A philosophy she says is gaining ground and being carried to urban centres by youth who leave the countryside. “Of course, we aren’t in the 16th century anymore. Times have changed. But we are going to fight to preserve and strengthen these practices, believe me!” No one would even think of doubting the words of this determined woman.

The Global Social Economy Forum (GSEF) took place on September 7 - 9, 2016, bringing together some 1,500 people from around the world to discuss and work on collaboration between local governments and the social economy for the development of cities. The forum was co-organized by the Chantier de l’économie sociale and associate members of CECI.

CECI was pleased to welcome three Uniterra program partners from Mali and Bolivia who work in social and solidarity economy. In addition to actively participating at the GSEF, Madani Koumaré, Baba Cissé and Alicia Canaviri met with Quebec organizations to discuss ways to strengthen ties of solidarity.