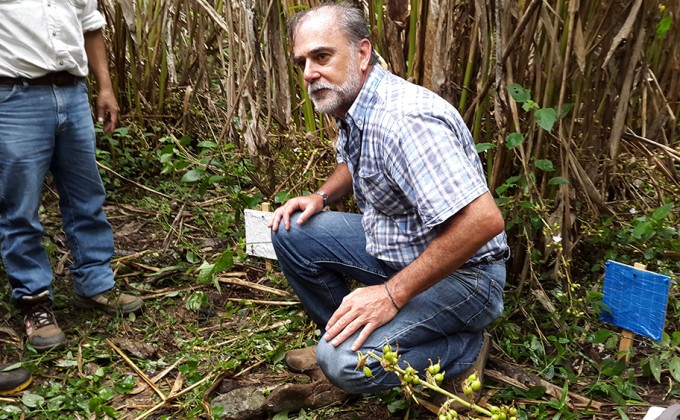 When Claudio Nunes arrived in the Cobán area in Central Guatemala in the spring of 2015, he found thousands of desperate small-scale farmers. For the past three years, their cardamom fields had been devastated by a tiny insect. The price of cardamom had plummeted. Nunes, a 59-year-old entomologist specialized in tropical pest control, was assigned by the Uniterra volunteer cooperation program to work with the Cardamom Exporters Association of Guatemala to develop a plan to fight infestation.

When Nunes completed his studies in biology at the Université du Québec à Montréal (UQAM), he had been working as a biologist in Quebec laboratories. Originally from Uruguay, he naturally came to the decision to return to Central America. “I felt that I would be more useful than if I stayed in Montreal, where many people could do my kind of work,” explained Nunes who, at 23, had come to Canada as a political refugee. “I wanted to fight inequality and poverty in rural areas. Growing up in this area during such tumultuous times and my political activism definitely propelled me towards social involvement. But more than anything, it has been so motivating to feel that I am being truly useful.” Nunes still has ties to UQAM and often returns as an associate professor and researcher (he received his PhD in 2004) and has been working for various development organizations in Bolivia, Equator, El Salvador, Nicaragua, Honduras and Guatemala.

In Cobán, Claudio Nunes works with around fifteen technicians. “I collect data in the farmer’s plots to assess the effectiveness of the control methods in place. At the office, I then analyse the data and report the findings in scientific articles or in plain language brochures.” In the early part of his assignment, he formally identified the pest in question – the cardamom thrip. “When we find a solution, we present the findings to farmers, train technicians and give conferences.” Nunes has also been working to build a specialized research centre, with the ultimate goal of eliminating widespread spraying of toxic pesticides by creating an organic, integrated pest management program. For Guatemala, the number one producer and exporter of cardamom in the world, this is a tremendous challenge.