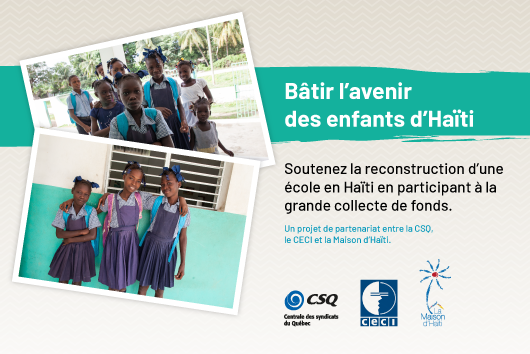 This partnership has ended

An earthquake on August 14 caused numerous human and material damages in the Grand Sud of Haiti, aggravating an already difficult socio-economic situation for the populations living in this region. In the three departments of the South, Nippes and Grand'Anse, 906 schools have been completely destroyed or seriously damaged according to UNICEF, as of September 8, 2021. More than 400,000 students and teachers in these departments are affected.

The CSQ, Maison d'Haïti and CECI are joining forces in a new partnership to finance a pilot project to rebuild a school in the Grand Sud of Haiti. Several unions affiliated with the CSQ are joining the Haitian diaspora in this first-ever fundraising effort, which will be used to rebuild a public school that can accommodate more than 400 students. The pilot project requires an investment of more than $600,000 Canadian for a paracyclic and earthquake-resistant building.

After making a $10,000 donation last October for the purchase of school supplies distributed by CECI, the CSQ is making a longer-term commitment to the education of Haitian children.

As part of this partnership, the CSQ and its affiliated unions are setting up a fundraising campaign. La Maison d'Haïti is mobilizing members of the Haitian diaspora for the fundraiser while ensuring their long-term involvement. With more than 50 years of expertise in the field, CECI will consult with and accompany communities in the selection of a site in an area where it is present and will supervise the work as well as quality control.

A big thank you to everyone who contributed to this project!